The White Spot Syndrome Virus (WSSV) is responsible for mass mortalities in shrimp farming worldwide. A trial conducted in spring 2020, aimed on the investigation whether MAXACTIVAT/Zn (MA), could improve growth performance and resistance to WSSV of shrimp (Penaeus vannamei).

Diets for shrimp were formulated according to nutritional recommendations and MAXACTIVAT/Zn was added at two different concentration levels (135ppm and 405ppm). Afterwards mixtures were pelletized and triplicate groups were fed for 28 days, whereupon disease challenge was started. The inoculation of WSSV was done orally and shrimp were housed in 10 liter tanks (single units).

There were no significant differences observed in terms of growth performance of the different diets fed, which indicates neutral impact of MAXACTIVATE/Zn on shrimp weight gain. Regarding the challenge trial there were statistically relevant differences observable. MAXACTIVAT/Zn contained at a concentration level of 405ppm (MA405) in the dietary feed decreased mortality by 40 percent points compared to the control group (CTRL) (MA405=33.3%; CTRL=73.3%). Moreover, there was a strong numeric influence of MA at a concentration of 135ppm (MA135) on mortality reduction (MA135=53.3%). 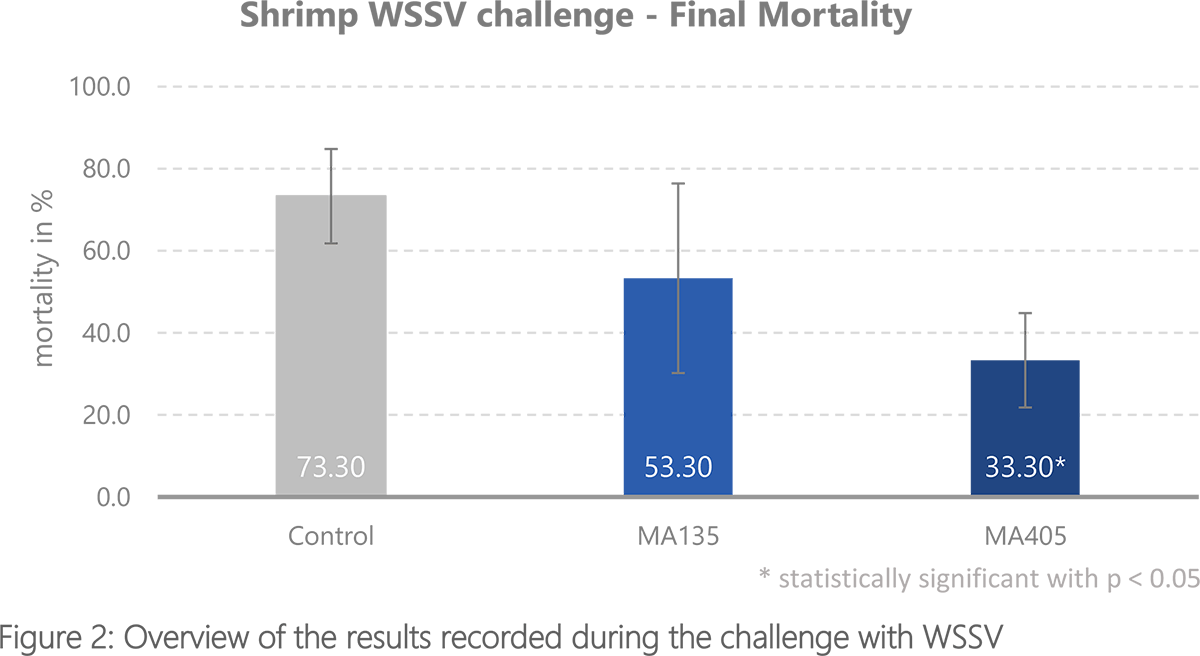 Thus, the experiment significantly points out the effectivity of MAXACTIVAT/Zn on the resistance of shrimp against WSSV. Further studies on the topic will follow but MAXACTICAT/Zn already is a promising product in the realm of WSSV control.